Over a one year period from October 2011 to October 2012 there were 7098 fractures identified in the ED at Glasgow Royal Infirmary. All of these would traditionally have been reviewed in clinic prior to the service redesign. Definitive management, advice and discharge was provided in the ED in 2697 (38%) episodes. 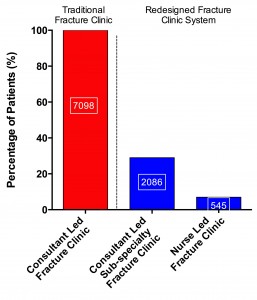 The remaining 4401 cases were reviewed by “Virtual” clinics, of which only 2631 required a subsequent face-to-face appointment (Figure 1). Of these, 545 were entirely managed in a nurse-led environment according to the treatment plan agreed at the virtual clinic.  In total 63% of patients are now discharged without a Fracture Clinic appointment. An audit of patient satisfaction demonstrated an overall 91% satisfaction rate with both early ED discharge and later “virtual” clinic review.

We have assessed the equity of the redesigned process and there was no difference in access to the triage or sub-specialty clinics based on patient socioeconomic category.